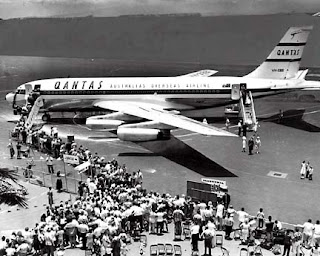 At Honolulu's old John Rodgers Airport on Lagoon Drive, residents line up to tour a Qantas jetliner after the Boeing 707 set a new record on its inaugural flight to Honolulu on June 30, 1959. The flight, which opened commercial jet travel to Hawaii, triggered an explosion in tourism, which remains the islands' No. 1 industry. Photo credit HA State Archives

Labels: 707, Blast From The Past, Classic, Qantas Airways, Vintage