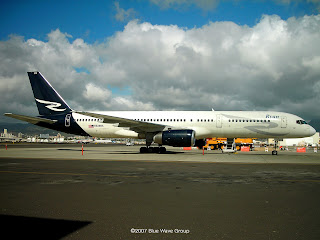 This 757 was chartered by New Mexico State University to bring their Aggies football team, to square off today against the University of Hawai‘i Warriors at Aloha Stadium; the Aggies marching band; and the Lady Aggies volleyball team, who faced off against the 11th-ranked UH Rainbow Wahine Friday evening. The Rainbow Wahine swept the Lady Aggies, 30-26, 30-28, and 30-22 at the Stan Sherriff Center.

It was delivered to Iberia as EC-HDG, Air Europa as EC-FEF and G-BRJH, National Airlines (2nd) as N526NA. It went to Ryan International after National ceased operations.