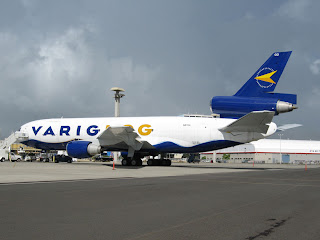 Varig Logistics has aquired a new DC-10-30 Freighter. Currently registered N811SL, it will eventually change to PR-LGO. This aircraft, msn 46921, originally was delivered to British Caledonian in 1977 as G-BEBM. After British Caledonian merged with British Airways, it then flew in BA colors. The aircraft was then converted into a freighter after being sold to Gemini Air Cargo (N608GC) and then last saw service with DAS Air (5X-BON) before being stored in December 2006. This aircraft flew CGK to GUM, then to HNL where it is today.
Posted by hal763 at 18:03

The next leg out of HNL was to MZJ (Pinal Airpark, AZ). I guees there'll be more work on the DC-10 before heading off to Brazil.