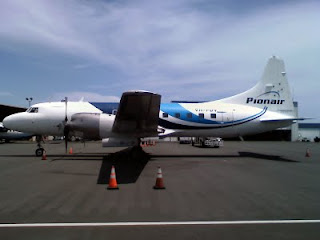 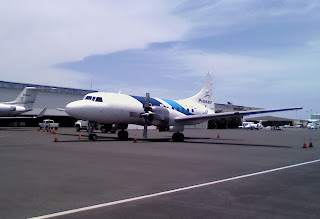 This Convair 580 of Pionair arrived on 8/1/09 around 130 and left on 8/3/09. This aircraft has a long and interesting history. It started its life as a 440 but eventually converted to 580 status in 1960. It served General Motors Corporation from 1959-1995 as N5124 then registered as N8124. It was then sold to Cypress Jetprop Charter in 1995 and entered the Canadian registry as C-GTTE. A year later it was sold to Kelowona Flightcraft Aircharter and leased to Air Chathams in New Zealand. It was once again registered as ZK-KSA. It was leased out and flew for King Soloman and Reef Air-Peau Vava'u Airways. In 2006 it was registered as VH-PDV and flew for Pionair.

It is seen here presumably on its way to the mainland U.S. fate unknown. Sorry for the poor quality as it was taken with my phone.
Posted by Aeros at 13:46

VH-PDV departed Sydney for Pago Pago 01Aug local date. Rumour has it the aircraft is destined for Canada where it is to be converted to a fire bomber. As to who for I'm not sure. Would be nice if it came back to Australia as a fire bomber!