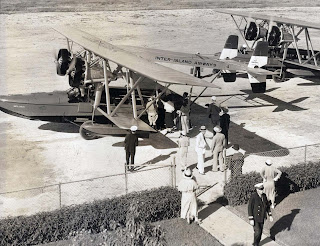 Founded as Inter-Island Airways, Hawaiian flew its Sikorsky S-38 on November 11th 1929 to Hilo with stops at Molokai and Maui.

Hawaiian’s achievement of 80 years of continuous flying in Hawaii is an impressive one. Even more impressive is Hawaiian’s safety record that is unmatched by any airline in the world.

No airline has flown longer without a single fatality thus enabling Hawaiian Airlines to proudly hold the World’s Safety Record.

Two records Hawaiian Airlines can justly be proud of.

Hau`oli Lā Hānau Hawaiian Airlines and Mahalo for serving the people of Hawaii for 80 years!

In the photograph above are Hawaiian's two Sikorsky S-38's, "Molokai" and "Maui" on the crushed coral ramp of John Rodgers Field, the predecessor to today's Honolulu International Airport.
Posted by Pan Am Hawaii at 20:18