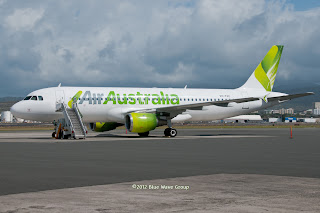 One of the now-defunct Air Australia's A320-212s, VH-YQC (msn 395), is transiting through HNL, as it is being reclaimed by its lessor, Aero Turbine Inc (Doral, FL). VH-YQC arrived late last evening from MAJ (seen above on the AirService Hawai‘i ramp), but the flight information is not available online.
395 was originally purchased by leasing company GATX, and delivered to TAP - Air Portugal [TP/TAP] in March 1993, as CS-TNE, and named "Sa De Miranda". It was with the TAP fleet for seven years. It then went to Air Luxor [LK/LXR] in March 2000, and was sub-leased to Novair [1I/NVR] twice during the four year lease. In May 2004, it was leased again by TAP, with the same name for six more years. The A320 was sold to Aero Turbine Inc, and leased to Strategic Airlines (Air Australia's predecessor) as VH-YQC in May 2010. VH-YQC, and fleet mate VH-YQB, were the only aircraft to receive the Air Australia livery and branding.
Mahalo to MRC Aviation for the heads-up!
Posted by Blue Wave 707 at 17:55