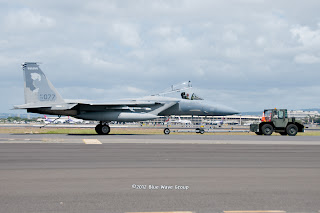 An Oregon Air National Guard F-15C Eagle made a barrier landing on Runway 4R this morning, after experiencing a hydraulic failure. HIK ARFF trucks, and State DoT personnel stood by as the wounded fighter made a successful landing. I was not on-hand for the landing, but witnesses said that the barrier did the job in slowing the F-15C to stop a couple of hundred yards after the barrier pit. Runway 4R was re-opened after the barrier was reset, and the runway inspected.
79-0077 (c/n 0626/C146) from the 114th Fighter Squadron / 173rd Fighter Wing, based at Kingsley Field, Klamath Falls, OR, is here as part of a detachment participating in Sentry Aloha. It's seen above, under tow back to HIK.
Posted by Blue Wave 707 at 13:30

Thank you for posting this nice to see are birds in action! :)