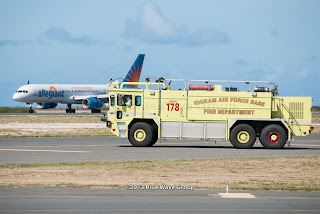 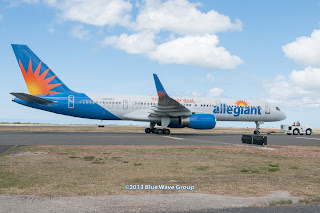 This morning, Allegiant Air flight AAY1056 [HNL-BLI], returned to HNL after experiencing a hydraulic fluid warning. It declared an in-flight emergency, and routed to land on Runway 8R. ARFF trucks from HNL ARFF Station 2, and a truck from HIK's ARFF responded to the call-out, and staged along Taxiway RA. The 757-204, N903NV (c/n 26966, l/n 520), landed without incident, with crash trucks in trail down Taxiway RA and Runway 8R (top photo). After coming to a stop on Taxiway RG, the flight crew radioed that they did not need ARFF assistance, as the trucks neared the aircraft.. However, according radio transmissions, firefighters found a hydraulic fluid leak on the underside of the 757. A tug from Bradley Pacific Aviation towed N903NV to Gate 17 with its passengers still on-board, with an ARFF truck following. AAY1056 departed again for BLI, later in the afternoon. Below, is the flight map from FlightAware.