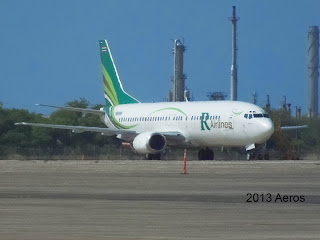 A 737-484 previously leased by R Airlines is making its way back to its lessors on the mainland. Owned by AerSale Inc, N353AS (c/n 25313, l/n 2109) made its way from Clark International Airport (CLK/RPLC), Philippines via Guam and Majuro before arriving at Kalaeloa (JRF/PHJR) this morning.

25313 was delivered to Olympic Airways as SX-BKA in December of 1991. It flew with Olympic Airways until December 2003, and was sent to Athens for storage. In May 2005, it was bought by AerSale Inc and re-registered as N353AS. In November 2012, it was leased to R Airlines (operated by Skyview Airways) in Thailand as HS-RCA.