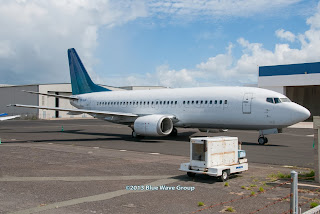 28738 was originally delivered to Frontier Airlines in November 1998 as N308FL, with the elk tail motif. In September 2001,  it was acquired by Air New Zealand, and leased to low-cost subsidiary Freedom Air International [SJ/FOM] as ZK-SJC. In June 2005, ZK-SJC was returned to Air New Zealand, as Freedom Air transitioned to the A320, and served with ANZ until this past June.
Posted by Blue Wave 707 at 07:58

The aircraft left NZ with titles and koru removed. The tail was still the blue/green combo (minus the koru).