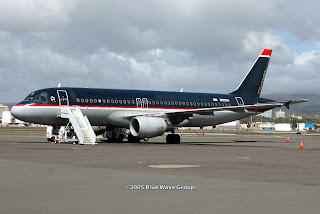 Our November edition of "HNL RareBirds Classic" takes us to November 2005, when this former US Airways A320-214, N120US (msn 1286, f/n 120), was headed to its new lessee, Spring Airlines (China).  It's pictured above on the Anderson Aviation ramp (though handled by AirService Hawaii), while on a break, as it made its way to China for repainting, and interior reconfiguration. This was one of three former US Airways A320 series airliners that stopped through HNL en route to China.

1286 was originally purchased by GECAS, then leased and delivered to US Airways in August 2000, direct from the Airbus factory in TLS.  In January 2006, it was delivered Spring Airlines [9C/CQH] as B-6280. For a few months in late 2012, it wore the Austrian registry, OE-IBP, as it was sold to Celestial Aviation (Vienna, Austria). From there, it was leased to AirAsia [AK/AXM] (Malaysia) in February 2013 as 9M-AQT. A few months later, it was sub-leased to Zest Air [Z2/EZD] (Philippines) as RP-C8987. Most recently, Zest Air has rebranded as AirAsia Zest, as it formed a partnership with AirAsia and their Filipino subsidiary AirAsia Philippines.
Posted by Blue Wave 707 at 03:20