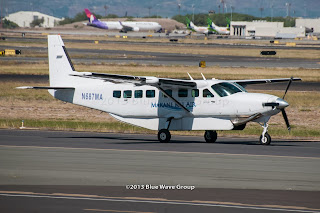 N687MA (msn 208B1002), one of the two Makani Kai Air's Cessna C208B Grand Caravans ditched in the waters a half-mile from LUP around 15:45HST. According to news reports, one of the eight passengers died. Some passengers were rescued by the Maui Fire Department, and the US Coast Guard also rescued some of the passengers. One of those on board, swam back to shore. The Grand Caravan went down shortly after take-off from LUP. The passenger that perished in the crash was Hawai‘i Department of Health Director Loretta Fuddy.

Our condolences go out to Ms Fuddy's family, and thoughts and prayers go out to the crash survivors.