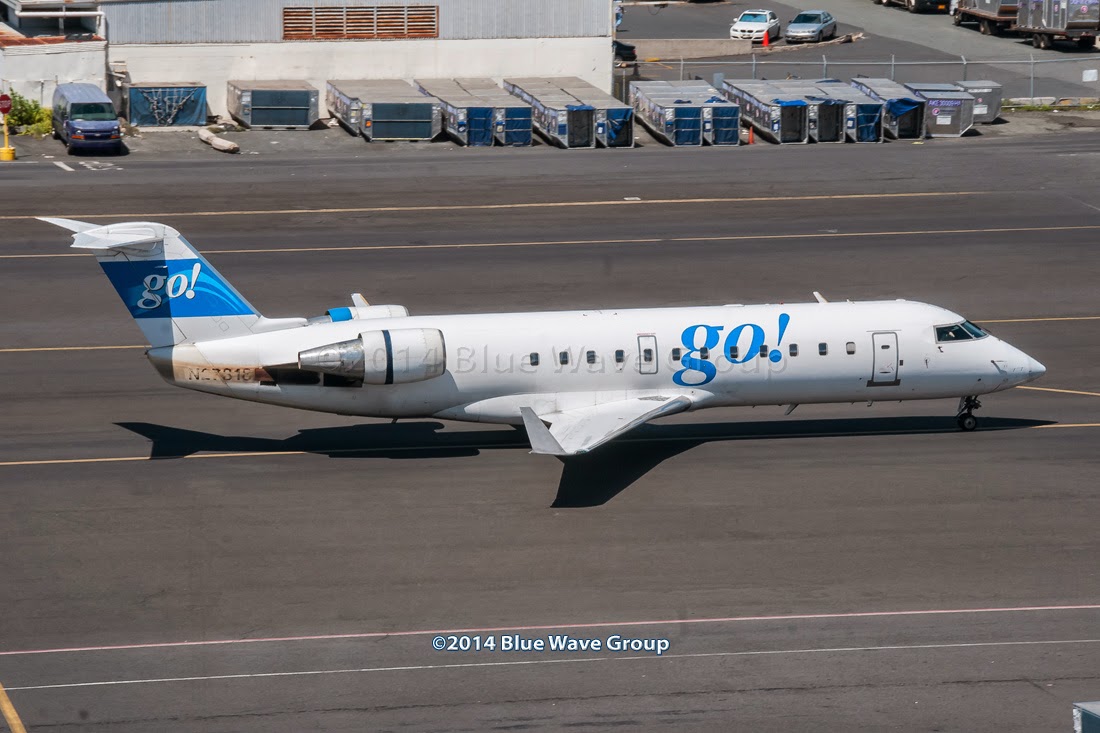 The Mesa Air Group announced this afternoon that their go! Hawai‘i operation will cease on 31 March 2014, and their five CRJ200s will be reassigned within Mesa's network. go!'s last flight will be on March 31st. Their website has the formal announcement on their home page. No word was given as to the displacement of the go! employees. The airline is in the process of sending three of the five CRJs back to their PHX base. 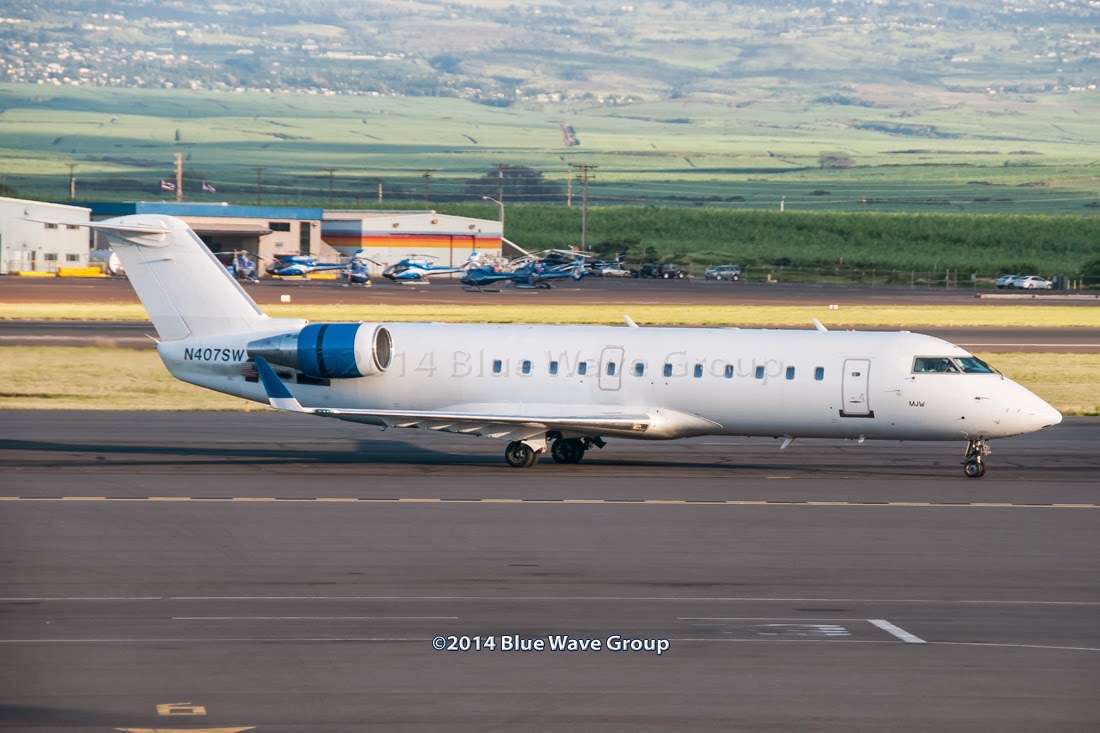 Interestingly enough, when my wife & I were at OGG last month, we came across N407SW without any go! markings on the tail nor fuselage, while waiting for our return flight to HNL. It appears that tail logo and the fuselage logo were painted over. Was this a sign of things to come? 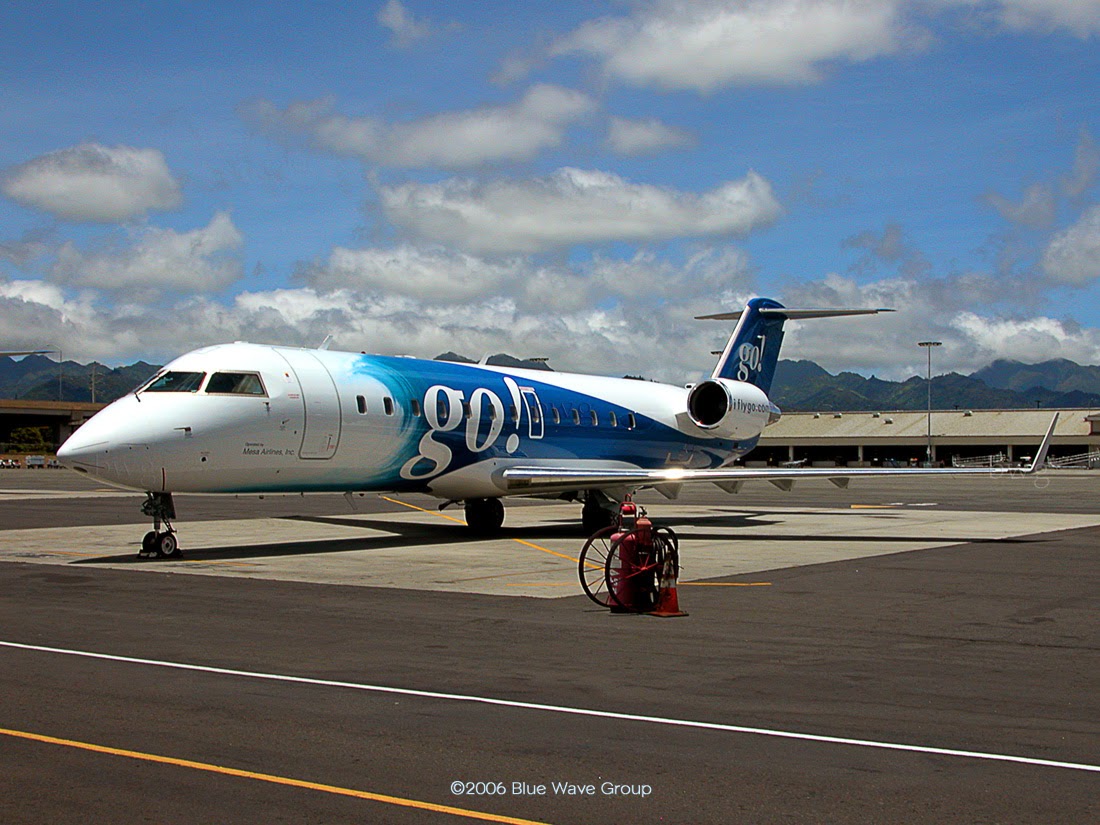 go! began service in June 2006 with five CRJ200s, and their fleet size never exceeded those five CRJs. Even when Aloha Airlines shutdown in 2008, they did not seem to gain any market share from Aloha's demise. Mesa never had a dedicated maintenance base at HNL, though they used the Leis hangar next door to Kamaka Air for minor maintenance and checks. For heavy checks, CRJs were flown to Phoenix and swapped out. The livery changed to the current (see top photo), as the original five CRJs were rotated out of the go! fleet. go! also had short-lived code-shares and partnerships with Mokulele Airlines and Island Air.

03.18.14 Update
The Pacific Business News is reporting that Island Air owner Larry Ellison was extremely close to purchasing go!'s operation, but backed away due to go!'s financial situation; and that Larry Ellison is interested in purchasing the rights to the Aloha Airlines name.
Posted by Blue Wave 707 at 17:58

go! Away! I cannot even begin to say how happy I am to hear this good news. Karma? Bachi? Sad though, in that the price we paid was the loss of Aloha. I know that as an airfan I'd normally hate to see any airline leave a market but this is definitely one I'm glad to see "go!"

I hope someone has what it takes to fill the void left by their "departure," maybe Aloha can make a comeback or Hawaiian can pick up some more airframes.

Aloha's demise was hastened by the go! entrance to the Hawaii market. In the end, Aloha was a poorly managed company with no cost control and it was only a matter of time that they went out of business.

So the Hawaiian monopoly grows. How much longer before they control 100% of the market? Go! was a disaster and evil but HA is close behind.

go!ʻs predatory pricing was meant to even attack Hawaiian Airlines as well, not just Aloha Airlines.

Monopolies are consumer-driven. go! never made an effort to expand their fleet to really be a close number 2 carrier like Aloha was. ASH only had 5 CRJ200s, Ornstein intimated in 2006 to me, "that CRJ700s and even 737 werenʻt too far behind." Looking back, it seems like was trash-talk.

Hawaiian knows that if they were raise fares or control the fair market, Island Air, and even Mokulele Airlines are still there, people could opt for those carriers as their fares are lower. HAL knows that Larry Ellison has deep pockets, and will increase MKUʻs fleet to compete.

IMHO it is unfair to say Hawaiian (by design) is trying to monopolize the Hawaii market. Is there anything they've done to be called "evil?" I think not. As far as publicly known, HAL has always tried to play fair, offer great deals, take good care of loyal customers, offer great "welcome to Hawaii" service to our visitors, and be a great community-minded contributor to our state.

Yes, they may benefit from the demise of go! but they did nothing to make that happen other than try to run a profitable, customer friendly business in a very difficult business to be in. Hawaiian just happens to do it well.

It will be interesting to watch the go! fleet. I wonder if, in fact, they will be utilized within the Mesa network or if they will go into storage.