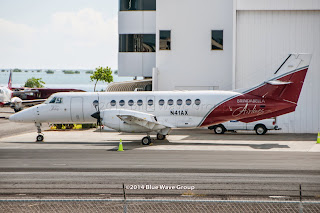 N41AX (msn 41082), a British Aerospace Jetstream 41, is making its way from CBR (Canberra, Australia) to storage at MQY [Smyrna, TN], via (OOL, PPG, HNL, and SJC). It was most recently with Brindabella Airlines [FQ/BRI] (Australia), until its closure in December 2013. It's currently owned by the CSC Trust Company (Wilmington, DE).

41082 was originally purchased by First State Bank of Utah (FSBU), and leased to Trans States Airlines [AX/LOF], in February 1996 as N565HK. Trans States was a regional partner for Trans World Airlines (TWA), and was marketed as Trans World Express (TWE). When American Airlines acquired TWA, Trans States became American Connection. N565HK was painted into the American Connection livery, and was also sold to Wells Fargo Bank Northwest. In March 2008, it was sold to Commonwealth Bank of Australia, then leased to Brindabella Airlines as VH-TAI.
Posted by Blue Wave 707 at 17:33