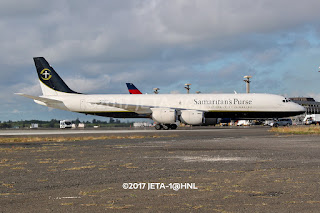 Samaritan's Purse DC-8-72CF, N782SP (c/n 46013, l/n 427), has made a stop at HNL this morning, as it arrived from Shah Amanat International Airport, Chittagong, Bangladesh [CGP] as NSP8. The Christian charity flew from Greensboro, NC [GSO] to CGP (via Shannon, Ireland [SNN]), to fly in relief supplies to Bangladesh to aid Rohingya refugees from Myanmar. N782SP is now on its way back to GSO.