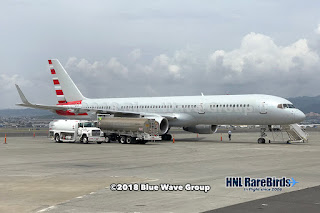 27201 was originally delivered to US Air in March 1994 as N622AU. It was repainted to the navy blue / grey livery as the airline rebranded itself as US Airways in February 1997. In late 2004, it became one of the airline's Star*Alliance logojets, that it would wear until 2010. In January 2007, it was sold to Aircastle and leased back to US Airways, then re-registered as N935UW (f/n 935); and two years later, had Blended Winglets installed. After its time wearing the Star*Alliance special livery, it was painted in the final US Airways livery in late 2010. In December 2013, it was transferred into the American Airlines, as they acquired US Airways. American Airlines returned N935UW to Aircastle in October 2017, and stored it at Goodyear, AZ.
Posted by Blue Wave 707 at 14:07