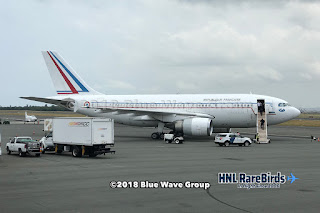 This A310-304 was originally delivered to Royal Jordanian in March 1987 as F-ODVD "Prince Hashem", leased from AFS. In November 1993, it was purchased by the Armée de l'Air as F-RADA, and the interior converted for VIPs.

The Rare Tahitian Airport Views Facebook page as a video clip of F-RADA departing PPT for HNL early this morning.
Posted by Blue Wave 707 at 07:40