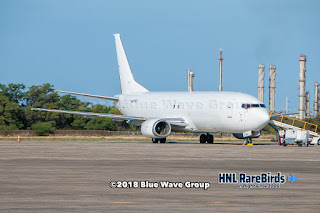 25371 was originally built for ILFC, and delivered to Cayman Airways in January 1992 as VR-CAA. In July 1993, it was leased to Carnival Airlines as N404KW. In May 1998, it was leased to Olympic Airways as SX-BKK, with a hybrid livery. In 2001, it was painted in the full Olympic livery. When Olympic re-branded as Olympic Airlines in 2003, SX-BKK was transferred over. In April 2006, it was leased to Sky Airlines [ZY/SHY] (Turkey) as TC-SKG "Gold", and painted in a special gold livery. In July 2013, it was sold to Ansett Worldwide (AWAS), and leased to Blue Air [0B/BMS] (Romania) as YR-BAR. It was returned to AWAS in December 2017, and ferried to DHN for freighter conversion.
Posted by Blue Wave 707 at 06:29