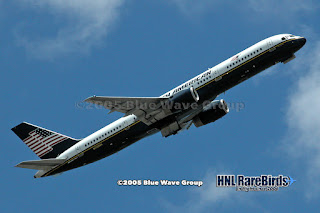 N750NA was delivered to North American Airlines [NA/NAO] in January 1995, leased from ILFC. From February to May 2011, it was subleased to WestJet Airlines. After it came back to North American, it flew with the airline for another five months, when it was returned to ILFC, and stored at GYR. In April 2012, it was bought by FedEx, converted to freighter, and delivered six months later as N971FD "Darcy" (f/n 971). It continues to fly for FedEx.
Posted by Blue Wave 707 at 07:50