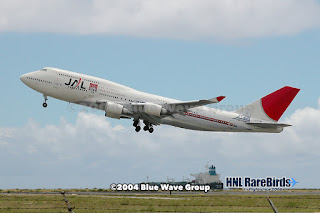 Our November edition of "HNL RareBirds Classic" goes back to September 2004, and Japan Airlines' 50th Anniversary of Hawai‘i service logo jet, JA8906 (c/n 26350, l/n 961). This 747-446 had a decal of a Douglas DC-6 affixed to both sides of the fuselage. It commemorated the airline's first international flight (February 1954), along with the 50 years of service between Japan and Hawai‘i.

JA8906 was delivered to Japan Airlines in March 1993 in the Landor livery. In the summer of 2003, it was painted in the "Arc of the Sun" livery. In late 2003, it wore a special decal to note the Hanshin Tigers victory in the Japan League baseball championship. Shortly after that, the above decals were applied, which lasted until late 2004. In November 2006, it was transferred to the JAL Cargo fleet, and converted to a freighter. In November 2010, it was sold to Kalitta Air as N743CK, and became one of the airline's DHL logo jets, and continues to fly with Kalitta. 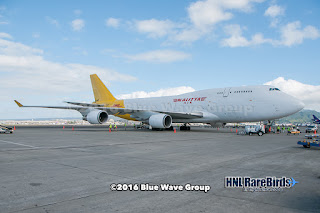 N743CK was photographed at HNL in December 2016, as it made seasonal Christmas shopping cargo flights.