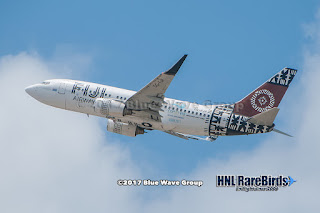 Fiji Airways has retired its lone 737-7X2, DQ-FJF "Island of Koro" (c/n 28878, l/n 96). This 737 was quite the frequent visitor to HNL as Fiji Airways (and previously Air Pacific) used it on the NAN-CXI-HNL, and the NAN-APW-HNL routes. It's making its retirement / lease return flight from NAN to MME [Teeside International Airport, Darlington, UK], via HNL, LAX, and BGR as FJI2002. Fiji Airways had a retirement event that they posted on their Instagram page. 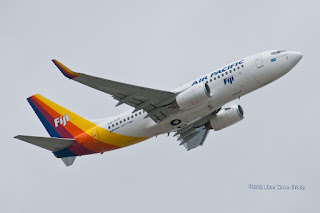 DQ-FJF was delivered to Air Pacific in September 1998, named "Island of Koro". It remained in the fleet when the airline was rebranded as Fiji Airways. In September 2017, FJF was sold to Willis Lease, and leased back. It was withdrawn from service earlier this month.
Posted by Blue Wave 707 at 08:22