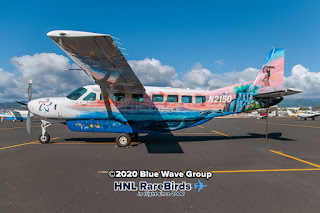 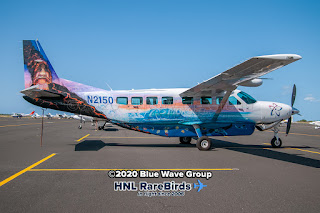 Mokulele Airlines' parent company, Southern Airways, has acquired N2150 (msn 208B5054) from Big Island Air. This colorful C208B Grand Caravan has the Mokulele flower logo placed on the nose section where the BIA logo once was, and subdued Mokulele titles on the fuselage. There's also a "Operated by Southern Airways Express" decal by the right passenger entry door.
It's also been reported that Mokulele is now flying under the Southern Airways Express Operating Certificate. Mokulele has already been using its parent company's 9X/FDY flight code.
Posted by Blue Wave 707 at 11:46