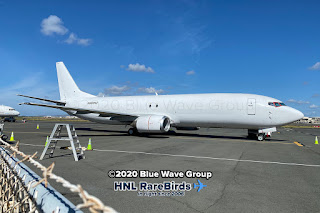 28702 was originally delivered to Thai Airways International in January 1998 as HS-TDL "Srikarn", and flew with Thai until August 2008. Less than a year later, in June 2009, it was acquired by Tatarstan Air as VQ-BDB, and flew until November 2013, where it was stored at SAW. In June 2014, it was bought by Blue Air as YR-BAQ, and flew until October 2018. A month later it was acquired by Airwork NZ, and stored at ROW as it awaited freighter conversion, which began this past February at MIA.