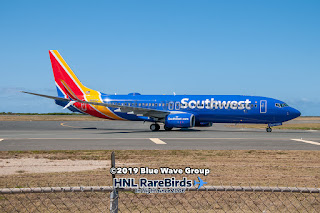 With the addition of slots at the Long Beach Airport allotted to Southwest Airlines, the airline announced six more routes from LGB, one of which is OGG, that begins on March 11th.
Previously, Southwest announced that HNL was in the initial destinations from LGB. The Dallas-based carrier will compete against Hawaiian Airlines at Long Beach.
Further information in this Southwest Airlines press release.
Posted by Blue Wave 707 at 10:24