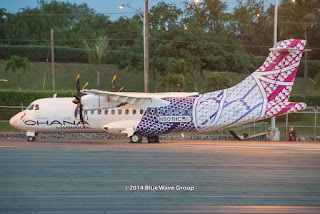 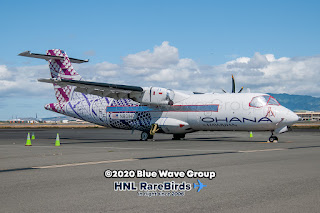 ‘Ohana by Hawaiian's ATR42-500, N801HC "Kaiāulu" (msn 629), was parted out and scrapped in their hangar over the past few weeks. Since the ‘Ohana ATR42s were grounded due to the Wuhan Corona Virus pandemic, N801HC was seen on their ramp with its engines removed, and the windows taped over with foil. It appeared that this aircraft would be readied to ferry to CDL with the rest of the ‘Ohana fleet for sale by Hawaiian Airlines. However, within the past few weeks, the ATR42 was parked in their hangar, and its titles had been painted over. The majority of the fuselage was trucked out of HNL today.
The top photo of N801HC was taken in 2014 as ‘Ohana by Hawaiian began its service to LNY and MKK. The above photo was taken in August 2020, as the engines were removed, and the windows were sealed with foil tape.
Posted by Blue Wave 707 at 17:22