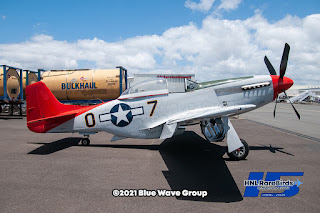 Wings Over Pearl has been selling air tours over a few parts of O‘ahu since May. It features a 1944-built North American P-51D Mustang, N551D (msn 109-28459), that a second seat added behind the pilot's seat. After seeing the P-51D in the skies around HNL and JRF, we were able to get a photo of it today, after it completed an air tour.
According to Joe Baugher's USAF/USAAF serial number website, N551D was registered with the US Army Air Force as 44-14826.
1944: It was supposed to have been delivered to the Royal New Zealand Air Force, but was not.
1951: Found in a container and registered as N1740B. Delivered to the Haitian Air Force as 14826, then as FAH826. Later sold to the Dominican Air Force for disposal.
It was acquired by the Erickson Group [Beaverton, OR] as N551D for aerial displays.
Posted by Blue Wave 707 at 12:05