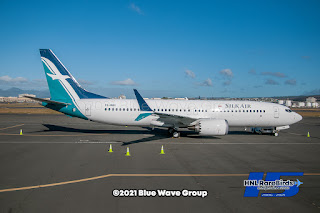 Singapore Airlines is taking delivery of 9V-MBG (c/n 44251, l/n 7436) today. This 737-8 is making its delivery flight from BFI to SIN as SIA8890, with stops at HNL and GUM. It was built in February 2019, and was one of the early birds that were affected by the global grounding of the MAX series, as it made its first flight on 09 Mar 2019. It was ferried to Moses Lake, WA [MWH] for storage during the grounding, and returned to BFI in October 2021.
9V-MBG was originally ordered by SilkAir, but was transferred to the Singapore Airlines (along with the eight on order), as SilkAir's operations were merged with its parent company this past January. Previous photos show that MBG was painted in SilkAir's livery, and it has yet to be painted in the Singapore Airlines livery.
Posted by Blue Wave 707 at 10:56