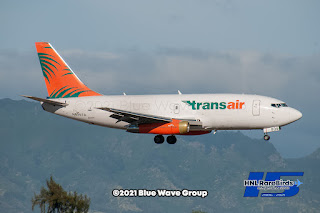 The Federal Aviation Administration has proposed to revoke the Air Operators Certificate for Rhoades Aviation (dba TransAir Hawaii) for numerous safety violations. The proposal cites general violations, as well as violations with their 737-200 operations. Their four 737-200Fs have been grounded since the crash of N810TA in July 2021.  Rhoades Aviation has 15 days to respond to the FAA notice.
However, the lone passenger 737-2Q8/Adv, N413JG (c/n 23148, l/n 1059) has been operating as MUI1 quite frequently of late. It's not flying under Rhoades' RDS flight code, as it's registered to TransAir Hawaii.
TransAir Hawaii's Short SD360s have continued to operate cargo flights.
Further information in this FAA News Alert.
25 May 2022 UPDATE
According to the Star*Advertiser, Rhoades Aviation plans to dispute the FAA's proposal.
On another note, Transair Hawaii sold their 737-4Q8F, N251AU (c/n 25104, l/n 2476), to Frontera Flight Holdings this past April. It was re-registered as N388TM, and ferried from DHN to SLW. It's due to be sold to Aeronaves TSM [México].
Posted by Blue Wave 707 at 16:37