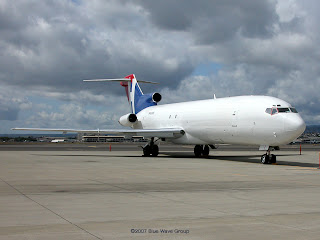 This 727 was previously registered as N76753 while it was with Express.Net Airlines (XNA). The -227 Boeing code says this 727 began its service life with Braniff International Airways (BN/BNF) as N448BN, then onto Continental Airlines as N76753. It was converted to a freighter for Express.net Airlines, but owned by MidAmerican Aerospace.
Posted by Blue Wave 707 at 15:52