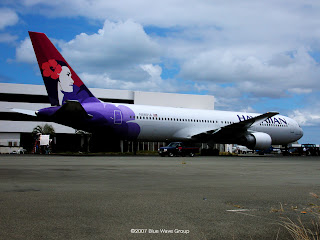 According to HNL insiders, it was a task to move the 763 to that location, as the alleyway leading to Circle Rainbow was not designed for a large airliner to be moved to, or parked in that area. In the 90s, some airlines would park their delivery flights in this area, or fronting the Circle Rainbow hangar. Hainan Airlines and Japan TransOcean Airlines 737-400s were seen and photographed there.
Posted by Blue Wave 707 at 12:48