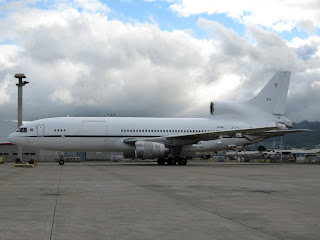 Parked on the North Ramp this Saturday morning was this U.K. RAF KC1, ZD948. Where it came from or going is currently unknown. This converted L-1011-385-3 Tristar originally was used by British Airways as G-BFCA and sold to the RAF in 1983.
The RAF has 9 Tristars (6 ex-BA, 3 ex-PA) in service. The ex-BA ones were converted to be tankers/transport aircraft with the designation of K1 or KC1. The difference being that the KC1s have been modified with the main deck cargo door. The RAF uses the hose-and-drouge method for air-to-air refuelling and you can see the housing for the system under the tail.
Posted by hal763 at 17:09