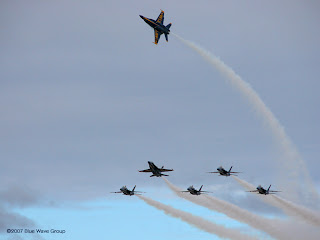 The US Navy's Flight Demonstration Squadron, the Blue Angels, performed yesterday at Marine Corps Base Hawai‘i at Kane‘ohe Bay (NGF), as part of the two-day "Blues On The Bay" airshow. The six Boeing F/A-18C "Hornets" wowwed the thousands that attended the Saturday show, reaching speeds nearing 600mph!

In today's photo, the Blue Angel 1 leads the six-ship delta formation to roll-out before landing. The Blue Angels will perform later this afternoon on day two of "Blues On The Bay".
Posted by Blue Wave 707 at 23:15