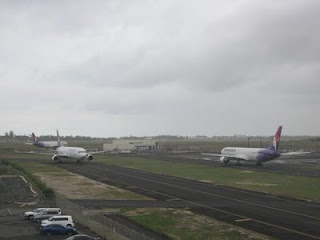 With HA parking more 767s at the Interisland Terminal, it was only a matter of time when I would see 2 767s would be passing each other on taxiways Golf and Lima. Well, that's what happened this past Saturday when N596HA was towed out and N591HA was coming in. The grass area between Golf and Lima is quite wide, but doesn't look it from a distance.

However, there is a fence along Golf that is really close to the taxiway. The wingtips won't hit the fence, but there is a light pole at the end of the taxiway that would cause some major damage if the aircraft was more than a few feet off the center line. The wingtip is probably 10-15 feet from the fence line. 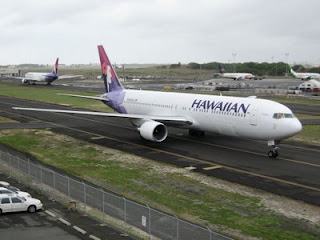 I don't know why they did it, but 591 was not taxiing into a gate in the Interisland Terminal. In the first picture, the aircraft was stopped at that point even though there was more than enough space for it to taxi past 596. Holding an aircraft and blocking the taxiway to the interisland ramp didn't seem to be the best thing to do since they sat there for around 10 minutes. Apparently, 591 was holding for a gate in the Overseas side since after I took the second picture and turned off my camera, it made a u-turn at the end of Golf onto Lima. Too bad I didn't get a picture of that as it was quite cool to see it happen and the fact that the jet blast was deflected up and hit me in the face 3 stories up.


BTW, for those who haven't seen it, check out the new Aloha Air Cargo livery in the background. (Sorry, but it was just there.)
Posted by hal763 at 21:15

Do you have any good shots of AQ cargo's new livery yet? This is the first time I've seen it and it looks nice. Good change from the old colors.

Nope. It's always parked where you see it in the picture and don't get out of the office much anymore. Plus, my camera only has a 3x zoom.

JetPhotos has a pic of N840AL in the new colors.