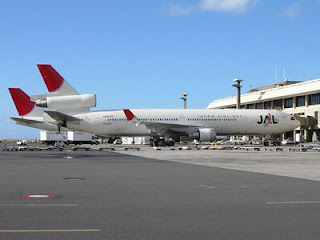 This pre-RareBird blog post features an MD-11 from JAL. This photo from September 24, 2004 as one of the few times that JAL has flown the MD-11 to HNL. This also happened to be the last time JAL used the MD-11 to HNL.

The MD-11 has had performance issues and as a result, poor sales for the passenger version and a short service life as a passenger aircraft with most airlines. This has also meant that very few have visited HNL from the carriers that have operated the passenger versions, which is a big turn around from all the airlines that have used the DC-10 to HNL.

Garuda had MD-11 service between Jakarta and Los Angeles, which featured a fuel stop at HNL, back in the 90s that ran for a few years.