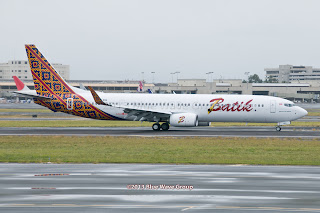 Batik Airlines, Lion Air Group's full-service subsidiary, is taking delivery of their first (of ten) 737-9GPER today. PK-LBG (c/n 38688, l/n 4414) is making its delivery flight using its registration as its identifier. Like other Lion Group deliveries, PK-LBG's stop at HNL was a brief two-hour layover. It's seen above rolling out on Runway 4R as it arrives from BFI.

38688 was originally ordered by parent Lion Airlines as PK-LKW. It was thought that Lion's Malaysian subsidiary, Malindo Air, was going to receive this 737-9GPER, but was allocated to Batik, Lion's new Indonesian full-service subsidiary, that will operate internationally and domestically.
Posted by Blue Wave 707 at 16:41