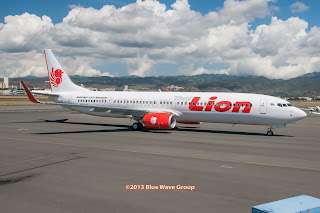 The Lion Air Group is opening a low-cost subsidiary in Thailand, called Thai Lion Air. The new airline is taking delivery of their first 737-9GPER today, as HS-LTI (c/n 38738, l/n 4643) makes its delivery flight from BFI as LNI1. It made its brief fuel stop before heading out to MAJ. As you can se in the above photo, Lion Air added "Thai" in grey, and country's flag to the livery.  HS-LTI is the first of six 737-9GPERs for the new carrier.

Further details about Thai Lion Air in this CAPA - Centre For Aviation article.
Posted by Blue Wave 707 at 08:11