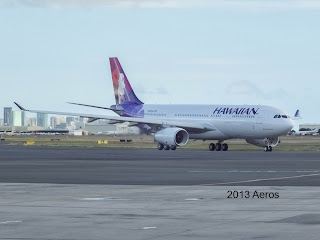 The 14th A330-243 for Hawaiian is named ‘A‘a, the constellation Sirius. N395HA will be the last delivery of 2013. ‘A‘a is the first A330 to receive the new interior featuring the new premium economy seating that will be installed on all new deliveries. Hawaiian's current fleet of A330s will get the new interior starting early next year.
Posted by Aeros at 21:46

Out of sequence again. It should have been N394HA but that's already being used by a Citation. The other number they skipped was N387HA which is a Learjet.