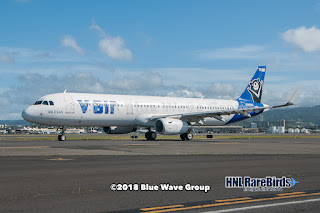 Avianca [AV/AVA] (Colombia) is taking delivery of N805AV (msn 6009), leased from Wells Fargo Bank Northwest. This A321-231SL, still in the V Air livery, is making its delivery flight from TPE [Taipei, Taiwan] to TUS [Tucson, AZ], with stops at GUM, HNL, where it will get the Avianca livery and interior configuration.