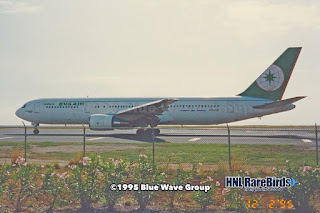 25117 was originally delivered to EVA Air in May 1991 as B-16602. In August 1994, it was sold to SALE, and leased back as N602EV. In June 2005, it was sold to Aircastle, then leased to Aeroflot [SU/AFL] as VP-BWV "A. Kuprin". It was returned to Aircastle in March 2012. Five months later, it was leased to Orient Thai Airlines [OX/OEA] as HS-BKC. As with many other airliners in the Orient Thai fleet, this 767 wore a hybrid livery with the new titles, and the Aeroflot base livery. In the following month, it was subleased to Saudi Arabian Airlines for two months. After its return to Orient Thai, it flew with the airline until September 2013. It has since been placed in storage at CEW [Bob Sikes Airport, Crestview, FL], where it sits today.
Posted by Blue Wave 707 at 06:02