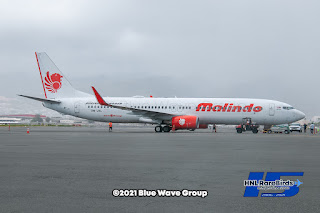 One of the first of the second-hand 737-900ERs bound for the Delta Air Lines fleet is making its way to the mainland. Malindo Air's 9M-LNL (c/n 38736, l/n 4592) is ferrying from KUL to SBD, via GUM and HNL. CH-Aviation reports that Delta is in the process of acquiring 29 second-hand 737-900ERs (along with seven second-hand A350-900s) from undisclosed airlines. The 737-900ERs will need to have the Delta cabin configuration installed, and repainted, before they begin to enter service next year. It's not known how many 737-900ERs Delta will acquire from the Lion Air Group.
9M-LNL was originally ordered by sister airline Lion Air as PK-LLM, but the parent Lion Air Group transferred it to Malindo Air, and was delivered in September 2013.
Posted by Blue Wave 707 at 17:52